If there is something that will be accompanying humanity until the end of its days, it is protocol. It is a practical discipline by nature, which is why there has never been a need to register it, but with the emergence of communication, sciences have begun to be studied. The reason is simple: it is a powerful communication tool that helps connect public and private organisations with their audiences.

One of the problems facing the discipline, which we will discuss in a future article, is the lack of scientific research. 99% of the protocol manuals that we can find today in the market have a practical profile, which means that they are written from a professional perspective and not with a scientific approach. As a result, we can say that no one knows what the protocol is because the scientific method has not been applied to approach this concept.

The review of the current little scientific literature on protocol leads us to affirm that protocol is a science in the embryonic state (Álvarez Rodríguez, 2008; Pulido Polo, 2015; Ramos Fernández, 2013; Ramos Fernández, 2014;  y Sáez González & Martínez Fierro, 2020) that, depending on what the professional and research community does, will be consolidated as a science or remain in a simple auxiliary tool.

So, as a science, what does protocol refer to? Our research is the science of the human order since it gives us a series of rules and guidelines to ensure peaceful and positive coexistence among human beings. In addition, this regulation takes a special value in celebrating the symbols -the events- due to its communicative value. Let us think that, from the moment two human beings decided to live together, they needed to generate a series of rules that allow them to live together. Who will sleep in the safest place? Who will eat the most nutritious foods? Who has the merits to lead the group? This coexistence will become more and more complex with the growth of the groups, which will make the rules of the protocol more like what we know today.

Maribel Gómez and I have come up with a definition of a protocol. The objective has been to reflect what the latest scientific literature on the subject gathers and our professional experience to bring discipline to the 21st century and build protocol’s science. This is our proposal which we hope will help to shed light on this subject that is taking its first steps and that supposes not only our profession but the passion for what we do:

“The protocol is a transversal scientific discipline that defines the social structures and norms generated by use, custom, tradition or legislation that society is endowed with to guarantee and facilitate the harmonious coexistence of all its members. As a communication tool that applies to all social areas, the protocol takes special relevance in the organisation of public and private events, where it provides techniques that make tangible the intangible.”

As we have already argued, there is no doubt regarding its scientific approach. It is a science in an embryonic state. This means that it is in its beginnings, as it happened with other social sciences such as psychology or sociology at the time.

We are talking about a transversal discipline because it involves civil society, public and private organisations, and institutions. The protocol is present in all layers on which the present society is built. It reflects society, and it changes and adapts along with it.

One of the objectives of the protocol is to give order. Therefore, through this matter, we can describe the state and social structures of the society to which it belongs. For example, by reading the Royal Decree 2099/1983 of precedence (art. 10 and 12) of the Kingdom of Spain, we can understand how this country is structured.

It produces rules generated by either considering what society usually does (customs or traditions) or those generated by legislative channels from the current Government. All this with a final aim: to guarantee and structure the coexistence of a certain social group.

It is a communication tool because it is used by institutions, private companies, and civil society to communicate. And therefore, the rules produced by the protocol take on special relevance in the organisation of events, public or private.

The protocol makes the intangible tangible because it allows us to speak without words. It is an essential ally in generating an institutional or corporate image in organisations and social people. It uses its essential four principles elements: spaces, people, times, and symbols. For example, within the latter, we consider the flags of countries since they make it clear to us who is hosting an event without the need for words.

In conclusion, we would like to address all those interested in the subject of the protocol. We expect professionals to find this definition interesting and appropriate. To the students of the subject, we hope that it has helped them shed light on your future work, and we encourage you to research the protocol. And to non-expert people, we hope that it will help you understand a little better what protocol is and what we professionals do in the field. 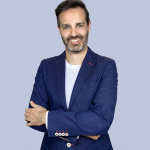 Written by: Daniel DELMÁS, Professional of events and protocol

Presentation of Magazine Global Mindset  “Navigating smoothly around the world” The Netherlands.

On 01 October, we will present you the digital Magazine Global Mindset© The Netherlands in the English language, aimed at businessmen, diplomats, businessmen, consultants, and students who aspire to careers in cross-border operational organizations. We will also introduce you to our writers who are students from the ProtocolToday academy and experts in different areas and from different countries, who are participating in this important international project.

We are honored to share with you our guests:

16:10 – 16:20 The importance of Protocol & Soft Diplomacy, by H.E. Ms. Irene Kasyanju, Ambassador of the United Republic of Tanzania to the Kingdom of The Netherlands. 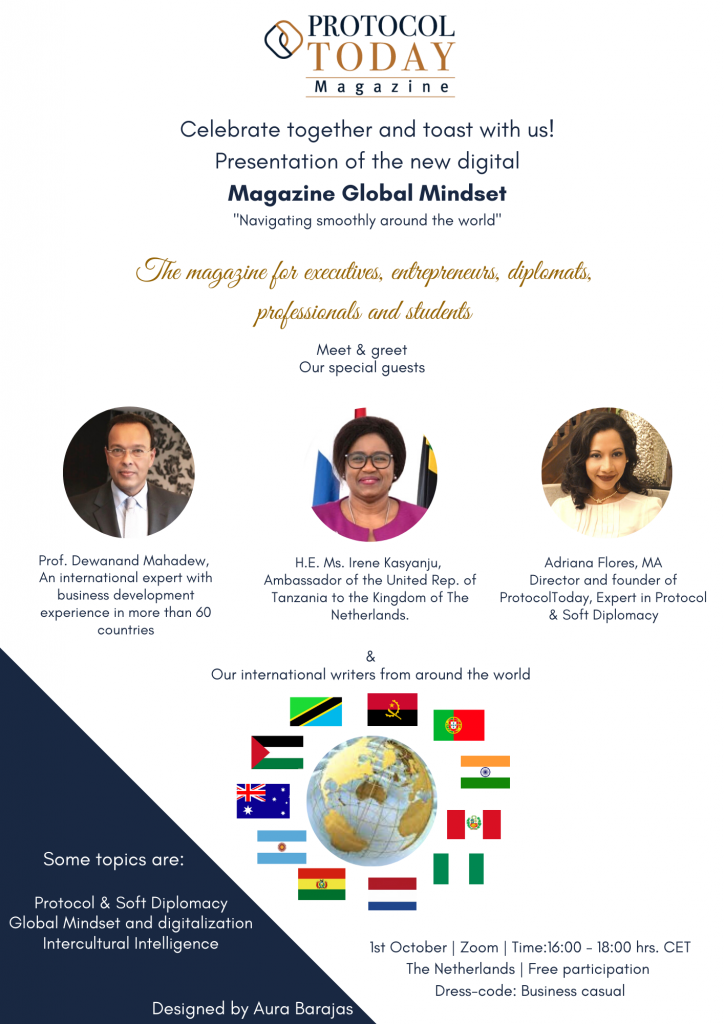 Professionals are active in the Hospitality & Tourism Industry.

Students who aspire to careers in cross-border operational organizations.

We invite you to be with us, your presence will make a difference and will be forever sealed in our history!

How to Apply: Complete and submit the registration form, specify the date and name of the event to confirm your seat. You will receive the zoom link one day before the presentation.

This Protocol Guide is issued by the Ministry of Foreign Affairs as part of our efforts to be a transparent and good host to our distinguished guests. It contains practical information based on the Dutch authorities’ interpretation of the rules for privileged persons. 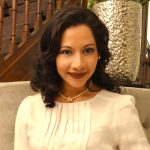 We are a capacity development company

and societies around the world

The world is changing faster than ever before in the past. At the moment we are all posing new challenges than any other generation has faced, with Covid-19 around; it’s imperative we evolve faster and adapt robust ways of working, connecting, and interacting with people not just nationally but internationally.

Hence, it’s important for Entrepreneurs/Executives/Diplomats and everybody else who is willing to create their presence internationally must possess and showcase a growth mindset that is more global. Working with people from different cultures/countries necessitates additional skills. To consummate important business deals, projects that need international funding, government projects, and everything else that is directly or indirectly requires interacting and exchanging ideas with people from diverse cultures that is not from your own; requires extra abilities.

Something that seems appropriate and graceful in one culture could mean the opposite in another culture. For e.g. presenting a Chrysanthemum flower bouquet exhibits loyalty and devoted love in Japan, In America it symbolizes longevity and joy, in Europe, it is associated with death. Therefore, being aware of differences in cultures, learning a few words of the local language or any distinctive characteristics of those countries/cultures will help break barriers; build strong and long-term allies around the world.

While understanding elements of Cultural Intelligence helps build bridges, it’s important to also showcase the best of our manners and etiquette, refined communications skills, follow proper Protocol and appear elegant/ classy to create that first and everlasting impression on others. One must always remember we are not only presenting ourselves but representing our company and country.  Based on which other people will make impressions about us. A positive impression could lead to meaningful associations and can open doors for bigger opportunities. 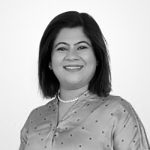 Fee of participation € 800.00 euros p.p for the total program, including:

The world is transforming into a global village and needs executives who can navigate smoothly across cultures.

Global Mindset Skills Provides you with: 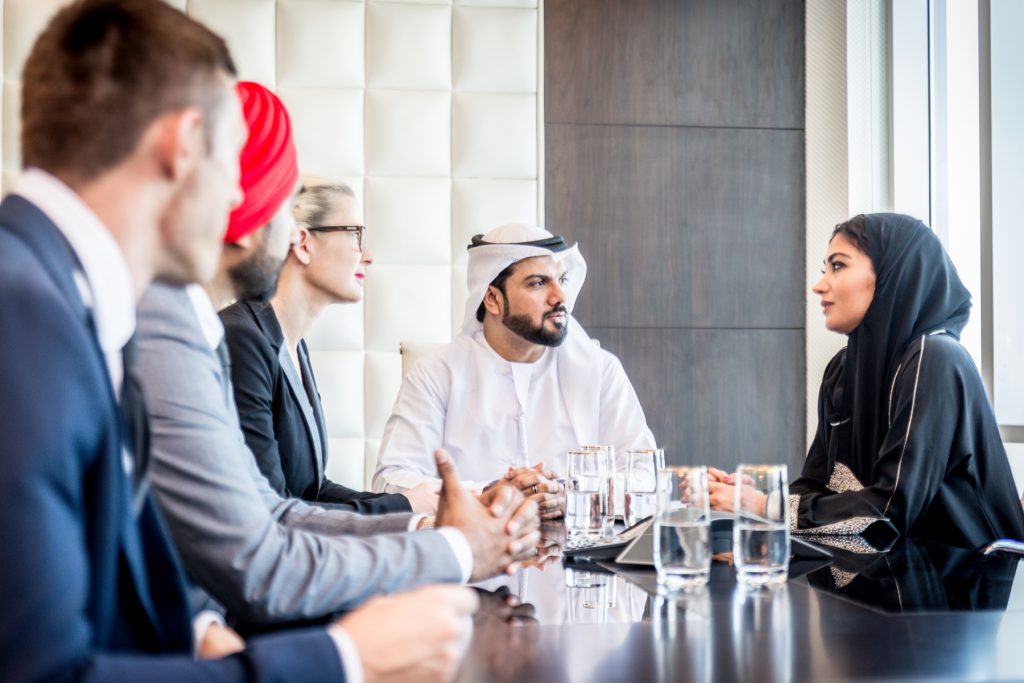 Program of the Masterclass and topics are:

Topics include: How to dress appropriately, personal style and its influence on your communication and introducing people in business context;

Visit to the international organization in The Hague

How to Apply: Full and send the registration form, specify the date and name of the masterclass, we will send you the program and the bank detail to submit the fee of participation to confirm your seat. 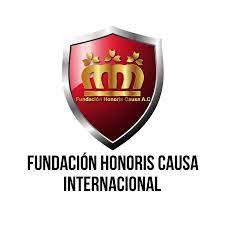 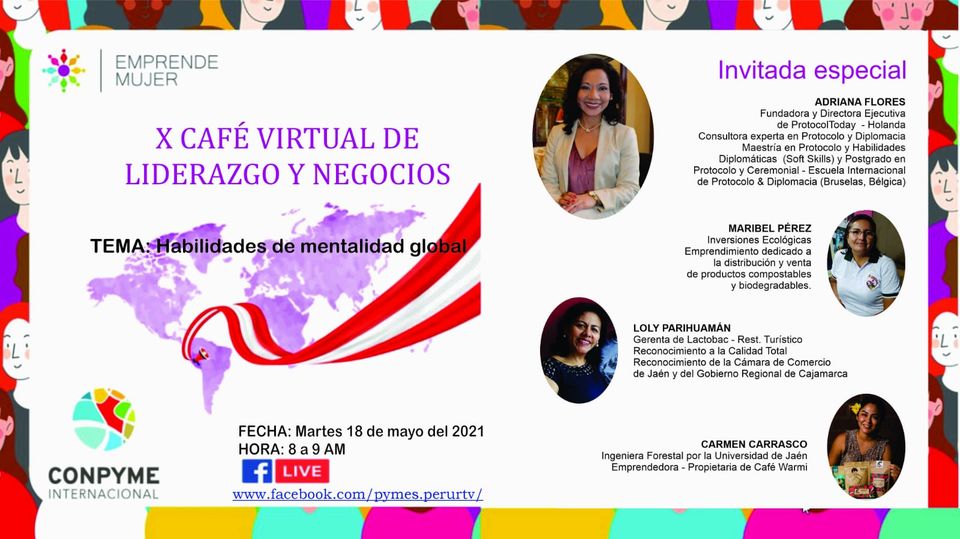 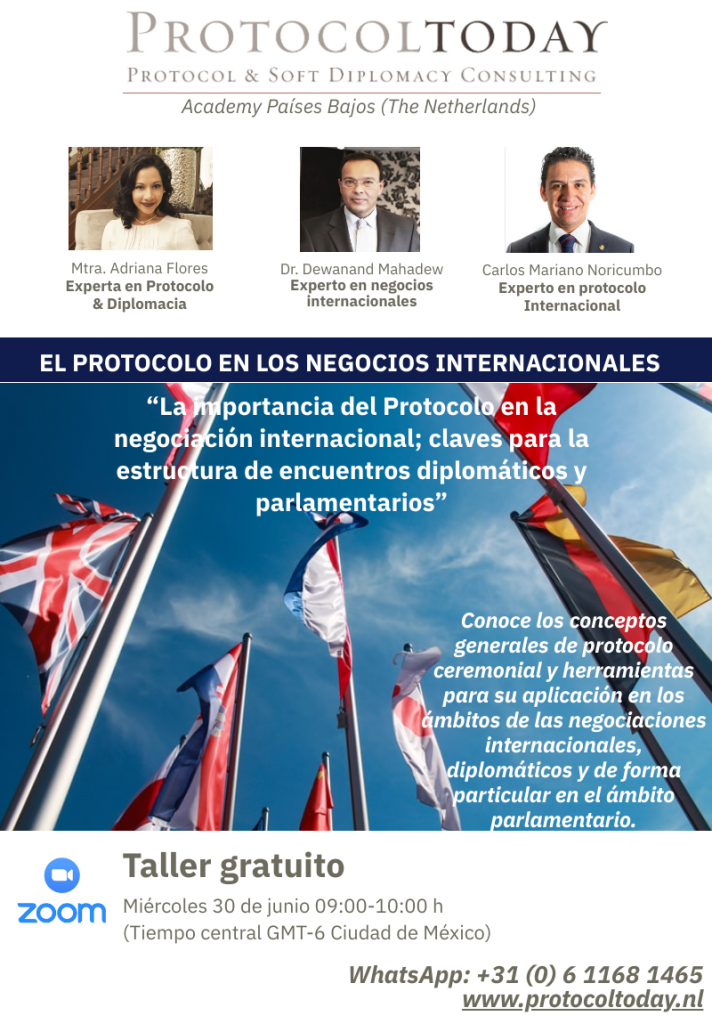 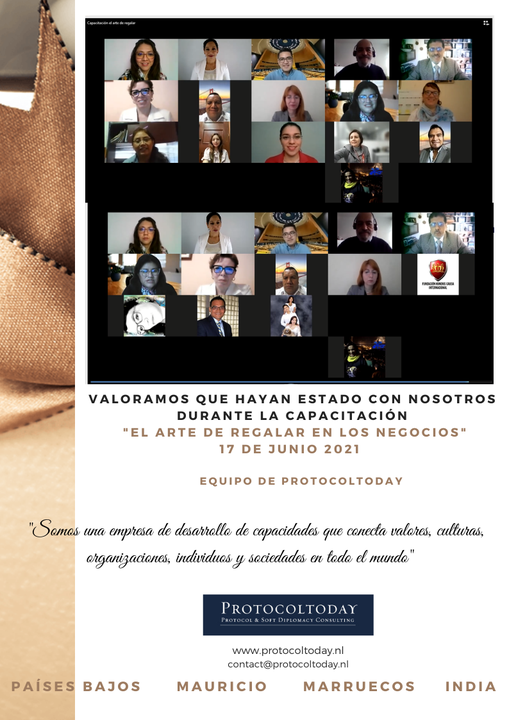