For more than 20 years, it is a term that has been gaining global significance as new technologies advance by leaps and bounds. Some societies adopted other similar names, but their function is the same. Coming from the apocope “Net” (Network) and “Etiquette”, “NETIQUETTE” is a worldwide base to take care of good behavior on the network. Today, we can share a lot of information on this topic in the many spaces that distance communication and online information media permit us.

While ICT’s world grows up, a new world for communication and information has emerged, that created the need to establish rules to facilitate and optimize the use of new technologies and networks in all their forms, even more In these times when the whole world has been forced to be on the net for contact, meetings, work, studies, and information exchange.

All these rules are based on general concepts of respect and a good level of communication. We understand that being non-face-to-face means of communication, we frequently forget that our voice tone, our expressions, and our gestures cannot be transmitted accurately; and whoever receives our messages cannot objectively judge our motives and intentions or, maybe they could misinterpret them if we do not express it optimally.

Within this global sphere of relationships, a vast majority have fully learned that, on the other side of our electronic devices, there is a world of people with different cultures, religions, beliefs, and positions. For this reason, we must apply respect, common sense, and good education to conduct ourselves in a space in which everyone fits and in which everyone deserves the tolerance and good treatment above our particular position. Then, this remembers us, that the consideration that we expect from others to us, is the same consideration that we must give to others.

In addition, our good education and training are visible in our actions and this is increased in the networks; that is, if we are used to being respectful and considerate to others in our face-to-face life, we will surely show the same online. But, when this does not happen, our bad behavior transcends in a more notorious way. Under this analysis, the use of “Netiquette” is important so we all learn to conduct ourselves with the necessary correction.

Definitely, globalization has opened great and unthinkable possibilities of benefits in the network, but we also find a big dark side. We are not always going to be in contact with polite people or with similar principles as ours; for this reason, undervalues like respect, tolerance, and good spirits, prudence must prevail to create and maintain reflective links with those people with whom we do not interact personally, either in a particular aspect or in the business world.

Initially, thanks to a publication of the Institute of Informatics Ethics (CEI – Computer Ethics Institute); – considered as the most prominent organization for ethical computer use in the United States, founded in 1985 by IBM and other important institutions, among them, Washington Consulting Group-, in 1992, they made the hallmark “The commandments for Computer Ethics” created by Ramón C. Barquin.[1]

These commandments became popular in recent years to persuade good behavior and ethics at the use of a computer. However, over time they have undergone some modifications and at present, I have taken the liberty of making an adaptation for the use of ICTs, considering that a large part of the population has access to a cellphone or other connected electronic devices to the Internet.

These ethics commandments are:

Today, these commandments have become a small base of ethics for the world of “Netiquette”, since the networks had arisen from a computer and spread to thousands of social sites, chats, forums, emails, blogs, different types of meetings, and endless connections in which our knowledge and behavior online are tested. With time, there are other rules that are adapted according to the needs that arise with modernity and technology.

As a reference, we must mention the book “Netiquette” published by Virginia Shea in 1994 that contains “The core rules of Netiquette”[2] and the publication of Sally Hambridge as a directive of Intel in 1995, an official document like a guide to the company employees, to behave on the Internet.

We might recognize that thanks to today’s technology, great capacities had been acquired. Let’s assume that the Internet has given us growing power and, therefore, it must be handled with great responsibility.

Under cultural and global intelligence criteria, we start a compendium that involves essential details for contact and business relationships in China; a country of ancient culture and traditions.

It is common knowledge, in many respects, their customs are diametrically opposed to Western customs and unlike many cultures that are dissipating in modernity, China is a country that has taken root in it, which makes it a wonderful and interesting option to get to know, but at the same time, “a complicated group” to access, if you don’t know them at least in a basic way in terms of their paradigms, environment, traditions and even superstitions.

This is one of the most extensive contents because there are many topics that must be deepened for proper development and correction and thus not make mistakes that can be transcendental so as not to lose the course of a good contact or a good business relationship.

Ideally, an invitation to do business in China is required and inevitably, has to be planned several months in advance. After reaching an agreement, it is feasible to send the necessary documentation to start the negotiations.

To make appointments, it is advisable to go to the embassy or consulate in our country to help us to prepare for the negotiation visit and guide us on the main steps to follow. Generally, they are willing to provide useful contacts and a list of addresses to get an interpreter to collaborate with details before, during, and after contacts or meetings, since, being a very special culture, could be very useful to understand the subtleties of everything that is discussed during the meetings.

It is recommended, practically in an unfailing way, to seek the services of a local consultancy, to guide in the steps to follow (China is considered a very bureaucratized country). The consultants admirably streamline the necessary procedures and the many issues that arise to reach a successful conclusion in business in this country. Additionally, they will help to prevent fraud and, on the other hand, their hiring transmits greater reliability for Chinese interlocutors.

These mediators also facilitate the task of getting a good “guanxi”, whose literal translation is: “establish relationships”; which becomes a concept of great relevance in Chinese business culture, since establishing a good “chain of relationships” that helps in the development of good negotiations, understanding that they are very ceremonious and it takes patience and tranquility to advance “step by step”, at their own pace.  They help to make it without as much effort as it would take to do it in an isolated way (not to say would be practically impossible).

After the pandemic and a great effort to return to normal life, business hours have changed. In some companies, 2.5 – days weekend has been established. Therefore, it will be necessary to coordinate a meeting or visit, with anticipation.

The usual office hours were from 8 in the morning to 5 in the afternoon from Monday to Saturday. However, in the larger cities, the westernization of their customs has resulted in working hours from Monday to Friday.

Usually, about schedules and dates, the best hours for business are during the morning, until lunchtime and the best dates to arrange interviews and meetings are from April to June and from September to October.

In general, workers have 2 hours at noon to eat (between 12 pm and 2 pm hours approximately) and under a strict and hermetic system, all commercial services and companies keep closed at this time (Even the most necessaries).

Under normal conditions, commercial premises are open from 9 in the morning to 7 at night, but, as with offices, the most commercial capital cities could remain open until 10 at night.

In most offices and government agencies, Fridays are dedicated to internal political issues and it is not a good date to set up any type of meeting with these authorities. It is a time known as “political study” and official workers they are not suitable for other activities.

When visits and appointments are scheduled, the Chinese calendar will have many dates that do not usually coincide with the Western calendar. One of the most important dates, for example, is May 1st, when it is customary for shops and companies to remain closed for a week, and the start date depends on the official announcement by the authorities.

Finding out exactly these dates to plan a business appointment, will prevent us from facing “lost time” or other difficulties to negotiate in good time; even more so, if the cancellation of an appointment or lateness, is considered an offense for the company and for person or persons are waiting. We must be very punctual to start relations in the eastern country to start with the right foot. As always in these cases, the best way will be to arrive sometime in advance and make a subtle prelude until the indicated time. (For them, it is better to arrive a little earlier than to be late).

Organized by: ProtocolToday Academy, The Netherlands.

“We are a capacity development company

and societies around the world” 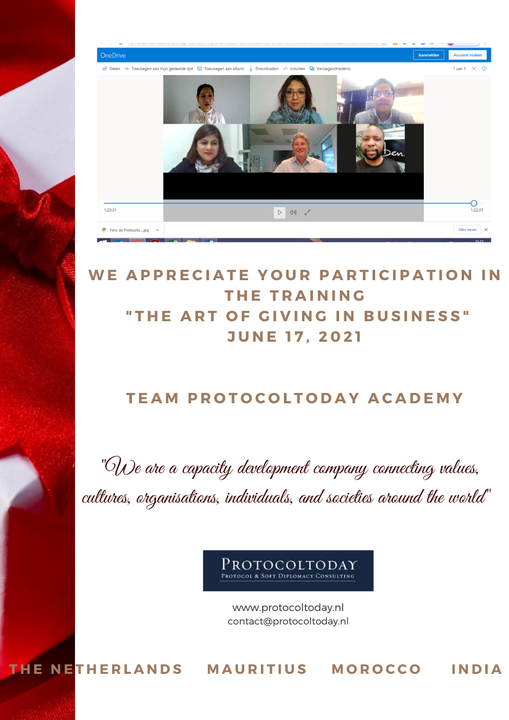 Our participants were entrepreneurs and expert ambassadors representing their own countries from The Netherlands, India, Morocco, Malaysia.

Experience of our participants:

Thank you for the valuable workshop Adriana FLORES.

Thank you for sharing your valuable experiences with us!