Social communicators and analysts may use phrases like “state visit,” “official visit,” or “working visit” to refer to a president’s visit to our country. In this regard, it is appropriate to clarify the differences between these denominations by the applicable legal provisions.

I’d like to start by emphasizing, as I have in previous writings, the importance of government agencies providing adequate information, training, and guidance to journalists to ensure proper use of the terms and illustrate the application of protocol and ceremonial. Their work would be framed within a more exact professional rigor.

It is important to note the existence of so-called experts who, in their eagerness for a job contract, confuse specific sectors of society through the overuse of the word “protocol.” It is unfortunate to see the innocence, improvisation, and desire to take possession using complete ignorance. This contribution is motivated by the desire to contribute to the resolution of this issue.

Let’s get started with these two observations. All the details are contained in the State Ceremonial and Regional Ceremonial (Supreme Decree 096-2005-RE), promulgated on December 2, 2005, during the administration of President Alejandro Toledo Manrique, which “includes the rules of style applicable in the relationship with the other States of the International Community” (article 1) and which I will use as legal support.

“State visits” are those made by a foreign dignitary at the invitation of the Peruvian president or on their initiative. The agenda will be agreed upon with the Ministry of Foreign Affairs’ diplomatic representation. Article 22 states that “when the illustrious dignitary’s ship arrives, both the Ambassador and the National Director of Protocol and Ceremonial of the State will enter it, to greet him and invite him to descend, accompanying him to the meeting with the President of the Republic or his representative.”

This includes mainly the following activities: laying of a floral offering in the monument to the Proceres and Precursors of Independence; I greet the heads of the Executive, Legislative and Judicial branches; visiting the mayor of the city of Lima and declaration of Illustrious Guest; banquet in the Great Dining Room of the Government Palace; signing of agreements and joint declaration; decoration with the Order “The Sun of Peru,” in the Degree of Grand Cross, the highest award of the Peruvian State instituted by the “Protector of the Freedom of Peru” José de San Martín (1821). As you can see, they are reserved for a president.

The “official visits” are like the previous one in that they include other authorities. Article 18 refers to those “carried out at the invitation of the President of the Republic, the Minister of Foreign Affairs, or another authority of equivalent hierarchy in our country and that has a specific official purpose” by the Heads of State, Heads of Government, Crown Princes of reigning houses, Presidents of Public Powers, Ministers of Foreign Affairs, and Ministers of State. This is the case with presidential inauguration invitations every five years.

Article 23 states that “If the visiting Head of State arrives when military honors are not appropriate, according to article 36 of this ceremony, the foreign president will be greeted by the Corridor of Honor set up for the occasion. In this case, the military honors due to his high investiture will be bestowed upon him at the Government Palace “. As a result, according to article 36, military tributes “will only be paid between eight (08.00) hours and eighteen (18.00) hours,” coinciding with the time when the national flag is still hoisted. Remember the official protocol’s prevailing trilogy: flag, shield, and anthem.

This precept states that when a visitor arrives with his spouse, the national authority must accompany him to greet him. Similarly, exchanging gifts with a social, cultural, and historical component between the guest and the host is customary. They will include relevant criteria and budgets, among other things. To avoid distortions of their intention and meaning, they must be defined; these convey messages inherent in the convoluted art of politics and diplomatic liaisons.

Leaders or heads of government, foreign ministers, or other authorities in the same hierarchy in Peru make “working visits” to deal with matters that require a short stay. The Foreign Ministry handles contacts with the diplomatic delegation. Furthermore, its National Protocol and State Ceremonial Directorate will determine the visit’s qualification.

Finally, “private visits” must be considered, which refer to the presence of a representative for strictly personal reasons. According to Article 31, “… the National Directorate of State Protocol and Ceremonial will coordinate its development with the respective Diplomatic Mission and offer the courtesies and deference’s appropriate to the visitor’s high investiture for the duration of their stay in the national territory.”

A few months ago, numerous journalists and members of the political class questioned the treatment of former Bolivian President Evo Morales Ayma by the government of President Pedro Castillo Terrones during his visit to our country. Even the Republic’s Foreign Relations Commission Congress declared him “persona non grata.” To formulate an objective analysis in this regard, it is useful to recall what is stated in article 29: “In the case of an official visit by high-ranking foreign authorities or personalities who are not Heads of State or Government, the National Directorate of Protocol and Ceremonial of the State will coordinate and execute the corresponding ceremonial.” At the same time, article 33 states that acts of “international courtesy” will be subject to the reciprocity principle.

The treatments received were flawlessly and unquestionably by our legislation. It is customary for a republic’s former president to be accorded some deference by the investiture exercised. Aside from incoherent thoughts, they were frequent acts of kindness. Erroneous interpretations of these primordial attentions are created in a variety of circumstances. The political component’s interference in the always considered, assertive, and discrete protocol practice must be avoided.

The practice of presidential diplomacy has elevated heads of State and government to the status of direct protagonists in international relations. Their participation has been emphasized in Latin America to express a new model of inter-country cooperation. It has been consolidating since the 1990s and has become the permanent axis of the integrationist will. As a result, it addresses this unavoidable issue that has now acquired more excellent value to avoid omitting the protocol’s connotation as a code of communication and rapprochement between nations. 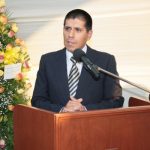 Translation and review by Eric Muhia